It’s been three years since I last finished the Cairngorms Loop, with probably three rounds of the inner loop in the intervening period. Weather, weather and more weather have affected other attempts, so it was refreshing to get around again.

The 2015 mass start commenced well, but the forecast gale on the Sunday meant I rode the inner to the Geldie Burn and then straight down Glen Tilt. 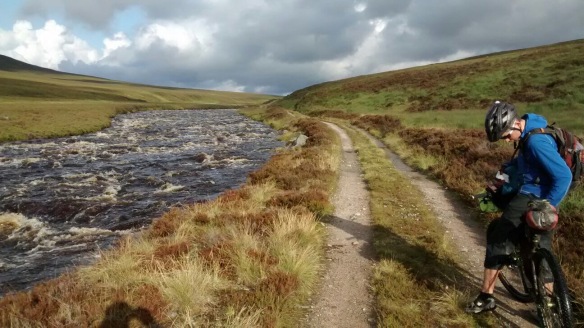 This was me in late 2015 I think, after a bivi in a ruined cottage. The Geldie burn was a mere trickle the night before, but heavy rain all night meant its character changed somewhat and it was all but impassible.

2016 saw the mass start cancelled, so I rode the bottom half of the West Highland Way instead.

Now, to 2017, and seventeen of us assembled on the start line. A week spent watching the snowgate webcam and worrying about weather, but committed to riding as much of this as possible. Two American friends came over for the weekend, and I’m determined that they get to see this route. Contingency plans discussed, and we’re off.

Six riders started pulling away, dropping the rest of us on the long drag along the old A9. Martin and I were riding together here, a pattern that would continue through the entire ride. Daniel and Louie, my Transatlantic chums, were slightly further back in another group.

The Gaick Pass came and went, and we arrived at the Loch an Eilean singletrack quickly. My tyre started losing pressure, more air was added, but I realised I was fighting a losing battle with a burping tubeless tyre.

I put a tube in at Glenmore, while being disappointed with the food service. “We’re too busy so we’ve stopped doing hot food” – Highland hospitality at its best.

The push up Bynack More was a drag as ever, into a persistent headwind, but it was clear and the uphill at least was devoid of snow. 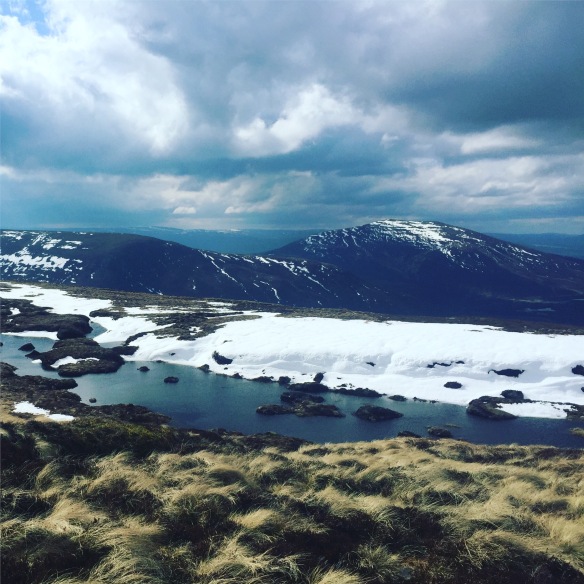 The top wasn’t, and we’d experience snow continually until we’d cleared the watershed at Glenfeshie.

This entire section was slow going, slushy snow that you’d sink through with vague traction, very on-off. I was thankful for the grip on my shoes, but not for the fact they didn’t drain at all. Wet feet for hours – trench foot in the making… 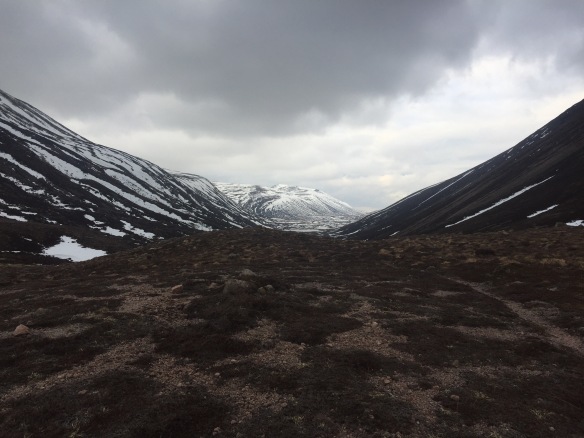 Reaching the Lairig an Laoigh and descending into Glen Derry, I remembered the drawbacks of inner tubes – punctures. Replacing one tube with the other, I gingerly rode down to join everyone at Linn of Dee and begin the Glenfeshie connector.

I noticed this warning second time I passed Linn of Dee but thought it somewhat prescient to the experience we’d been through:

Again, tough going. Banks of snow to posthole through, and darkness falling, but luckily the weather was clear. It was spooky to ride this in pairs, Martin and I led the way. It was spooky looking back to no lights, the contours of the land hiding Louie’s floodlights. We paused at the Feshie, reckoning that the vague navigation might see the Americans crossing the river and not seeing the path etched into the hillside.

Some Indiana Jones-style bike carrying around waterfalls, and we got around this obstacle. Daniel and Louie decided to scout out a bivi spot on better ground, but Martin and I had set our objective as Aviemore. It was about 11pm, but we were still feeling strong after 13hrs so wanted to continue.

One thing that changed this year was the route through Glen Feshie. The course of the river had changed and eroded the path, so Steve instructed us to use the most obvious route on the ground. Estate work to improve access meant that some quick routes now exist from the bothy, so we made great progress to the road head, and then spun out way into Aviemore.

The first tragedy of the ride – where’s the petrol station?? The 24hr garage was a building site, and our thoughts of a 1am feed diminished. For some reason we kept pedalling into Aviemore and found the late night butcher selling burgers (cooked). A godsend, some hot food that was demolished quickly, and then we set off to find a bivi site.

Finding the picnic area behind the Tree Zone at Inverdruie, and not surprised in the slightest to find it empty, we set up a bivi for the night. Alarms set for 6am, sleep arrived quickly for me.

I awoke before my alarm went off, feeling surprisingly alive for under four hours of sleep. We got moving by 6:40am, saddle sores making themselves known.

A few pauses en route to Tomintoul, then we got to the disappointing Fire Station Cafe at about 11. I didn’t realise that anywhere still served those single serve Rombouts filter coffee cups, but I didn’t manage to secure one because the “large coffee” was a couple of spoonfuls of instant. Yum yum. The bacon rolls were fine though.

Anyway, task in hand, finish this ride. Knowing that the South Easterly would continue, that the next stage was open and exposed, and that it was a South East direction of travel, I was not looking forward to the next stage of the journey. I was right. The open valleys made the next stage a brutal fight against headwind, and I had some fearful thoughts around a Tour Divide attempt. Day after day of flat riding into the wind could be horrific!

We climbed to the end of the doubletrack, and then hit the lovely singletrack along the loch which broke up the climb. 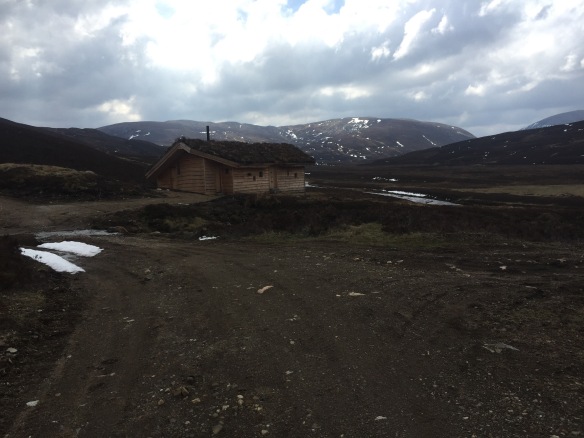 An odd lodge appeared, likely a hunting lodge but new since my last visit. It looked like the far side had a lot of glass so likely some spectacular views across the valley.

A quick descent into Braemar, some food, and then the flat interlude to the Geldie. It was perfectly easy to cross, and we were making good time so would manage at least Glen Tilt in daytime.

I do love the Glen Tilt singletrack, especially ridden downstream as it flows so well. Techy riding on narrow trail, deliberately slipping the back of the bike out around obstacles, it’s one of my favourite pieces of trail in Scotland.

We stopped before the sting in the tail, grabbed some food and then commenced the desperate slog uphill. Once the trail evened out, we pressed on to Fealar Lodge. This next part should be fast riding on good estate road, but the wind meant we were pedalling downhill in a low gear.

Reaching the singletrack and the final descent, we had perfect light so I really started enjoying the descent. This time it felt like I wasn’t on a desperate drag to the finish, and not worrying that I might need a second bivi, so I could just let go and have fun. The open views were great, and helped with the navigation somewhat, even when the path and GPX didn’t match.

Lights came on for the very last part of the route, the road descent into Blair Athol, and then we were done. 35:30, nearly 2 hrs quicker but moving slower. I think if we had better conditions (no wind) and had kept to the same schedule then we could have dropped a couple more hours off, so I’m maybe not quite finished with this route yet.